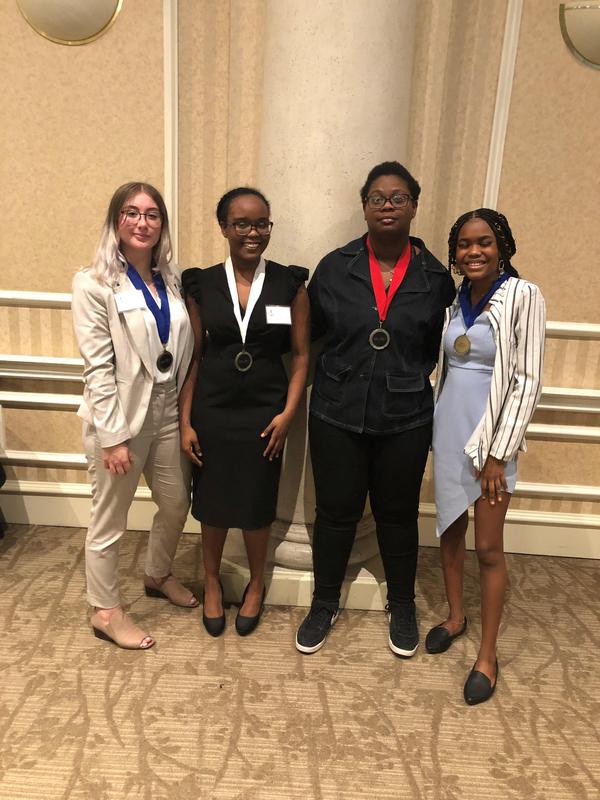 The following winners had a tremendous showing at our BPA State Conference.


These student have now qualified to represent Seaford and the State of Delaware at the BPA National Conference in May in National Harbor, Maryland.

Thank you all for of your support for our Career and Technical Programs here at Seaford High School! 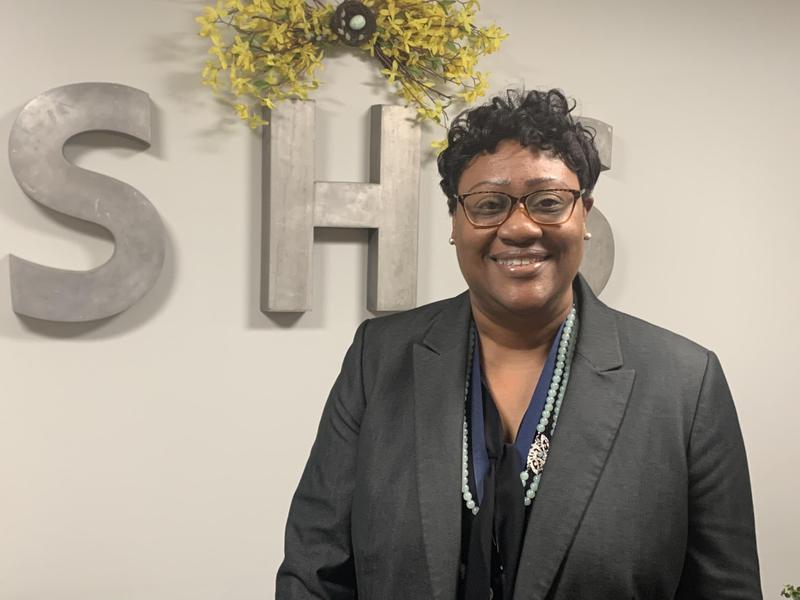 Dr. Corey Miklus, Superintendent of Schools, and Dr. Zulieka Jarmon-Horsey, Seaford High School Principal, cordially invite you to a meet and greet at Seaford High School in the auditorium on Wednesday, February 26th at 6pm to 7pm. You are a valued stakeholder in our quest to make Seaford High School the best high school for your child’s education! We hope you can make it and we look forward to seeing you there!
Read More » 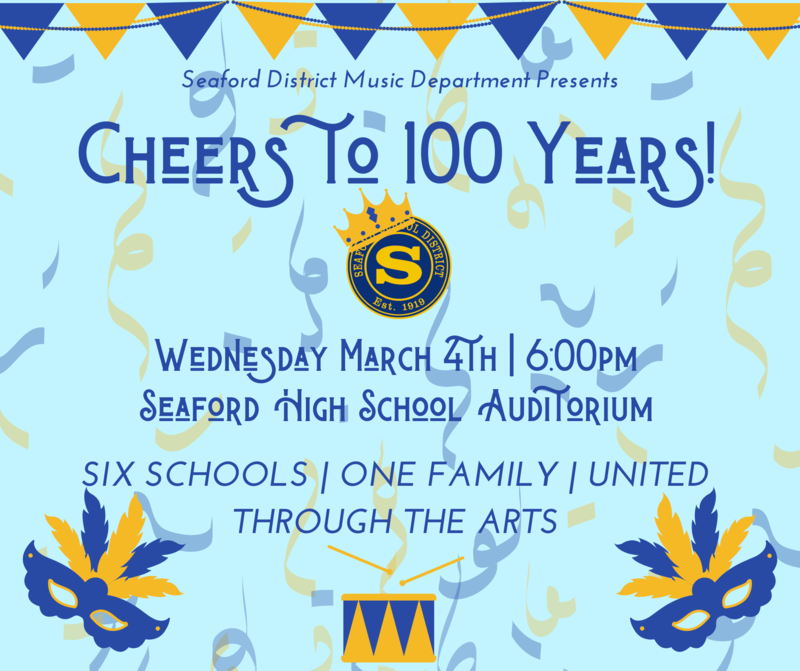 Join us on March 4th at 6:00 p.m. in the Seaford High School auditorium in celebrating music in our schools with a centennial celebration!
Read More » 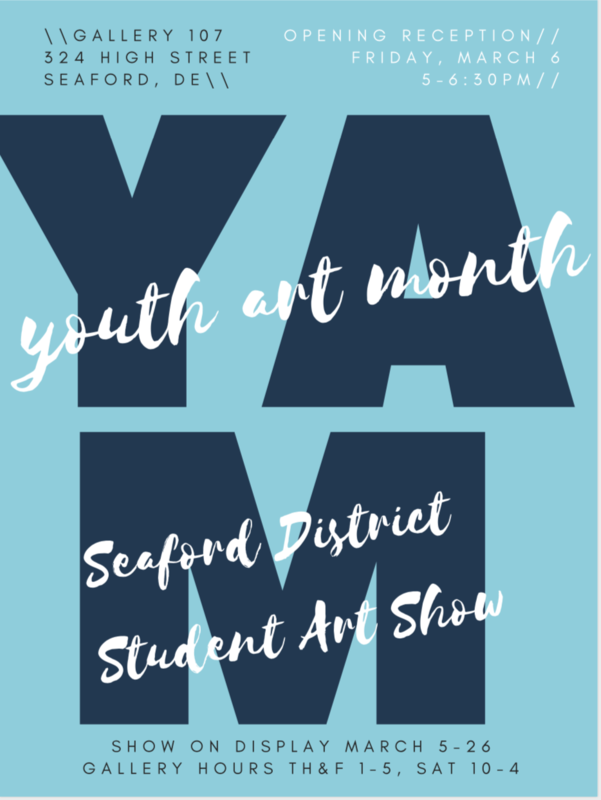 Creative works from art students K-12 will be on display at Gallery 107. This multi-media art show, sponsored by the Seaford School District, highlights Youth Art Month, a national celebration sponsored by the council for Art Education. The annual celebration, which typically takes place in March, emphasizes the value of art education for all children and encourages support for quality arts programs in all schools.

The opening reception for the art show will be held on Friday, March 6 from 5:00-6:30. Student artwork will be on display at Gallery 107 through March 26th. #WeBelieveInBlueJays #SuccessForAllStudents
Read More » 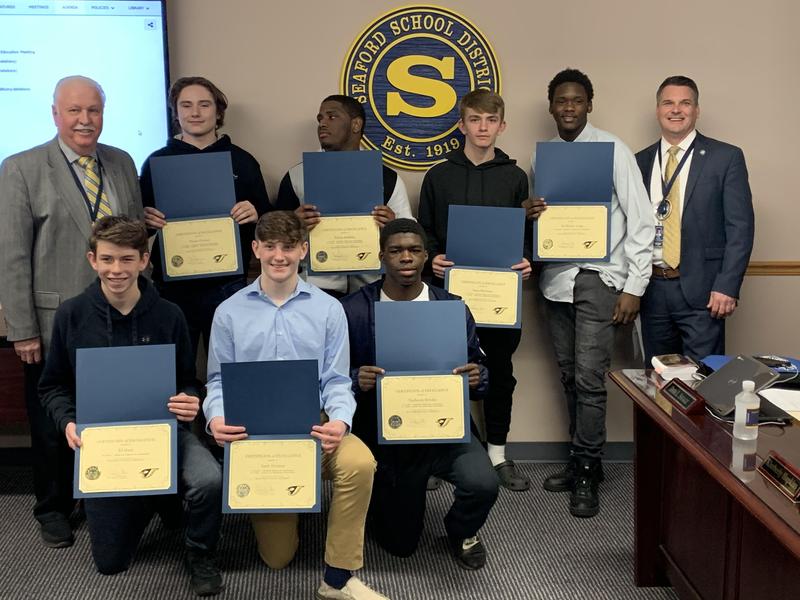 Seaford Wrestlers Honored at Board of Education Meeting

SHS and SMS wrestlers were honored at Feb. 18, 2020 Board of Education Meeting
Read More » 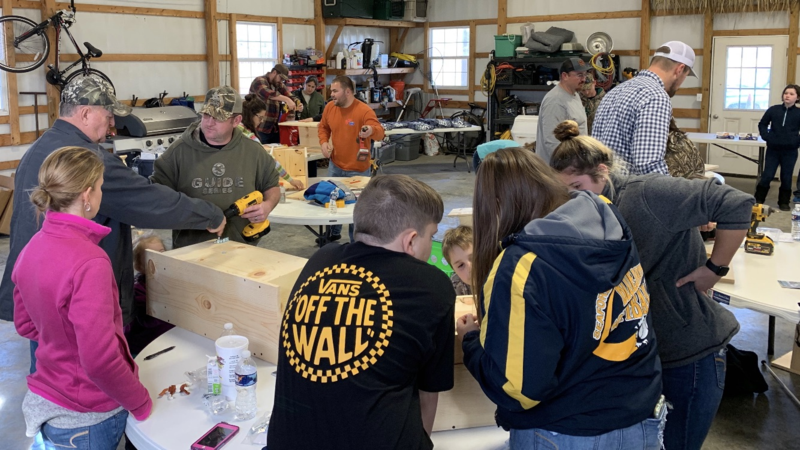 On Saturday February 15, 2020, SHS and SMS FFA students participated in a conservation project that will have a direct impact on the biodiversity of the Nanticoke River. The project netted a total of 64 wood duck boxes that will be placed along the Nanticoke River outside of Seaford later this month, providing essential nesting cover for wood ducks along the river. We may be joining Delta Waterfowl for the installation of the boxes.
Read More » 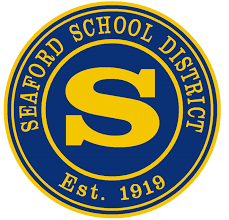 Seaford NJROTC edged out Eastern AJROTC 794.3 to 786.6 in the National Air Rifle New Shooter League. Their second win in a row. They currently have a 2 - 1 record. Seaford NJROTC was led by, Christopher Krumm who shot a 229.3. The remaining contributing members were Samuel Dorvilier, Saleem Perez, and Carlos Roman . Seaford NJROTC is from Seaford, DE, and is coached by Anthony Rowe.

Eastern AJROTC currently has a 1 - 2 record. Eastern AJROTC was led by, William Smith who shot a 227.7. The remaining contributing members were Dalton Wood, Kamden Garcia, and Parker Schwartz. Eastern AJROTC is from Louisville, KY, and is coached by John Sallee.

Next up Seaford NJROTC will compete against Chatham AJROTC from Chatham, VA. Chatham AJROTC currently has a 2 - 1 record. While Eastern AJROTC has a bye week.

These two teams are competing in the National Air Rifle "New Shooter" League. Sponsored by the Orion Scoring System, the league is a national team league exclusive to athletes in their first year of competition. Teams are from high schools and junior rifle clubs throughout the United States. Over 10 weeks each team competes in 8 games. Each week, each team is paired with another team with a near equal skill level.

In each game the teams compete in what is known as a Three-Position Air Rifle match. The match is modeled after Olympic Rifle competitions but adapted to high school age athletes. Each athlete will shoots 10 shots in three different shooting positions, prone, standing, and kneeling. Each shot is worth a maximum of 10.9 points. The sum of points scored in the 30 shots is the athlete's total. The team score is comprised of the best four athletes from each team.
Read More » 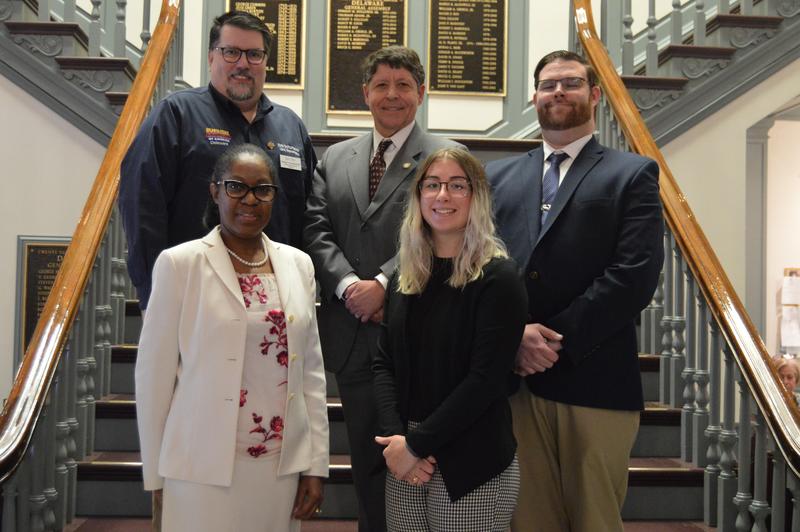 Business Professional of America (BPA) was honored at Legislative Hall where House Concurrent Resolution passed both the House and Senate recognizing the work of Delaware BPA. SHS Senior and local chapter President Marley Fishburn attended along with Mr. Schumacher, SHS Business Teacher. The group picture includes Dr. Lisa Wilson from Delaware DOE, Rich Jester of JP Morgan who serves as BPA Board chair and Representative Baumbach who wrote the resolution.

In conjunction with the Delaware Division of Public Health, we are providing this Coronavrus (2019-nCoV) update for your information.
Read More » 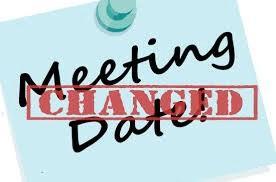 Board of Education Meeting Date Change

The Board of Education Meeting originally scheduled for Tuesday, January 21, 2020 will now be held on Monday, January 27, 2020.   The meeting will be held in the Board room at the District Office beginning promptly at 6 p.m. with the public session being held first.
Read More »
RSS Feed